For a few years now, my blog has been about growth and the inner life. But, like everyone else, my life has a lot more going on in it than just sitting around thinking deep thoughts. Awhile back, I decided that I wanted to share some of these other things, and, to that end, I decided to change the name of my public FB page to reflect more of who and what I am. But what am I? Am I an artist? A fibre artist? I’m a potter too, so do I call myself a craftsperson?

And even though ‘maker culture’ is a contemporary term used to describe a kind of DIY culture in the world of technology, I choose to make to make it my own. She did say disruptive, didn’t she? I’m a maker.

And since I’ve been asked quite a few times lately how I make my sheep and gnomes, I decided to write about them.

Hand felting these little sweethearts starts with unwoven wool called roving. I source my 100% Canadian wool roving from local businesses, usually within 20 km of my home. Most of it still has straw or hay in it, with a few sticks and weeds for good measure. Sometimes I leave it in, sometimes I take it out. I like the effect of seeing hay in my sheep, but if I think it will poke you and make you bleed and curse my name, I’ll take it out.

A few years ago, I switched up my sheep and started adding hand-dyed curly wool, which doubled my time, effort, and price but, you know, CURLS! And COLOUR! It makes me so happy, and that’s the whole point, right? Again, I try to source only Canadian wool, and I buy all my wool from Canadian businesses, the closer to home, the better. My sister in Nova Scotia brought me some wool from Gaspereau Valley Fibres, a dream of a place, and this year, all my gnomes beards are from some lovely Nova Scotian sheep.

So now the work starts with this single needle. A felting needle has very fine serrations along it that, when poked through wool, cause the wool to felt. For one sheep, I probably jab the wool about a trillion million bajillion times. Well, ok, maybe not that many. But it’s a lot. And about every 100th poke, I stab myself in the finger or thumb and swear. 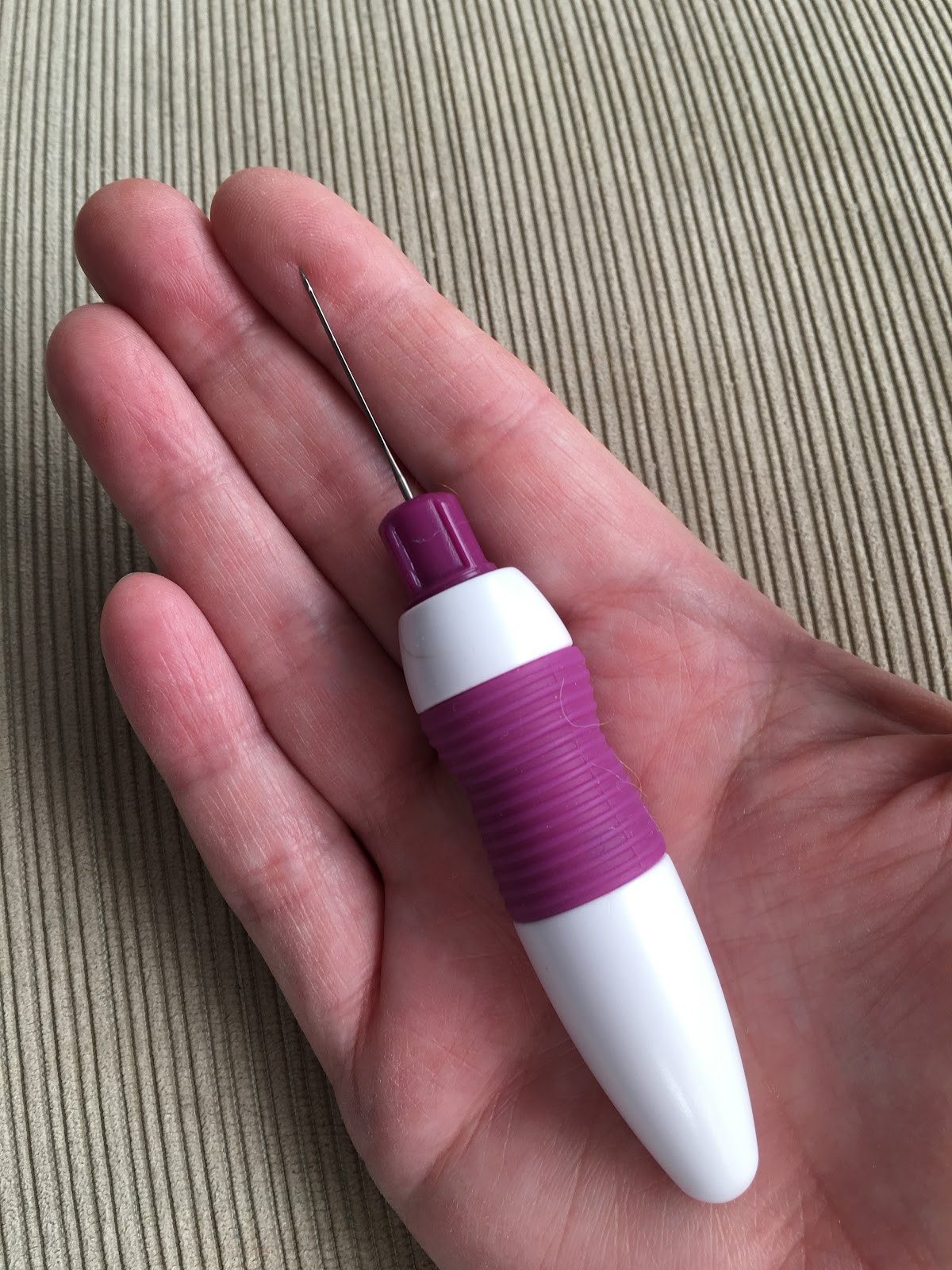 And after an hour or two of poking and rolling and forming and shaping and reshaping, making little legs and ears, and tails, I end up with one of these. This is one of my first little guys, with a heart on his side, and no mouth or nose. Of course, I couldn’t just be happy with that. Oh no. I thought I had to give them smiles. So now, in addition to curls, every little sheep gets a nose and a smile. Or often multiple smiles, because I have to pick off the one I just did and redo it because it’s just not quite right. Perfectionist much?

So now, these adorable little sheep look like this… 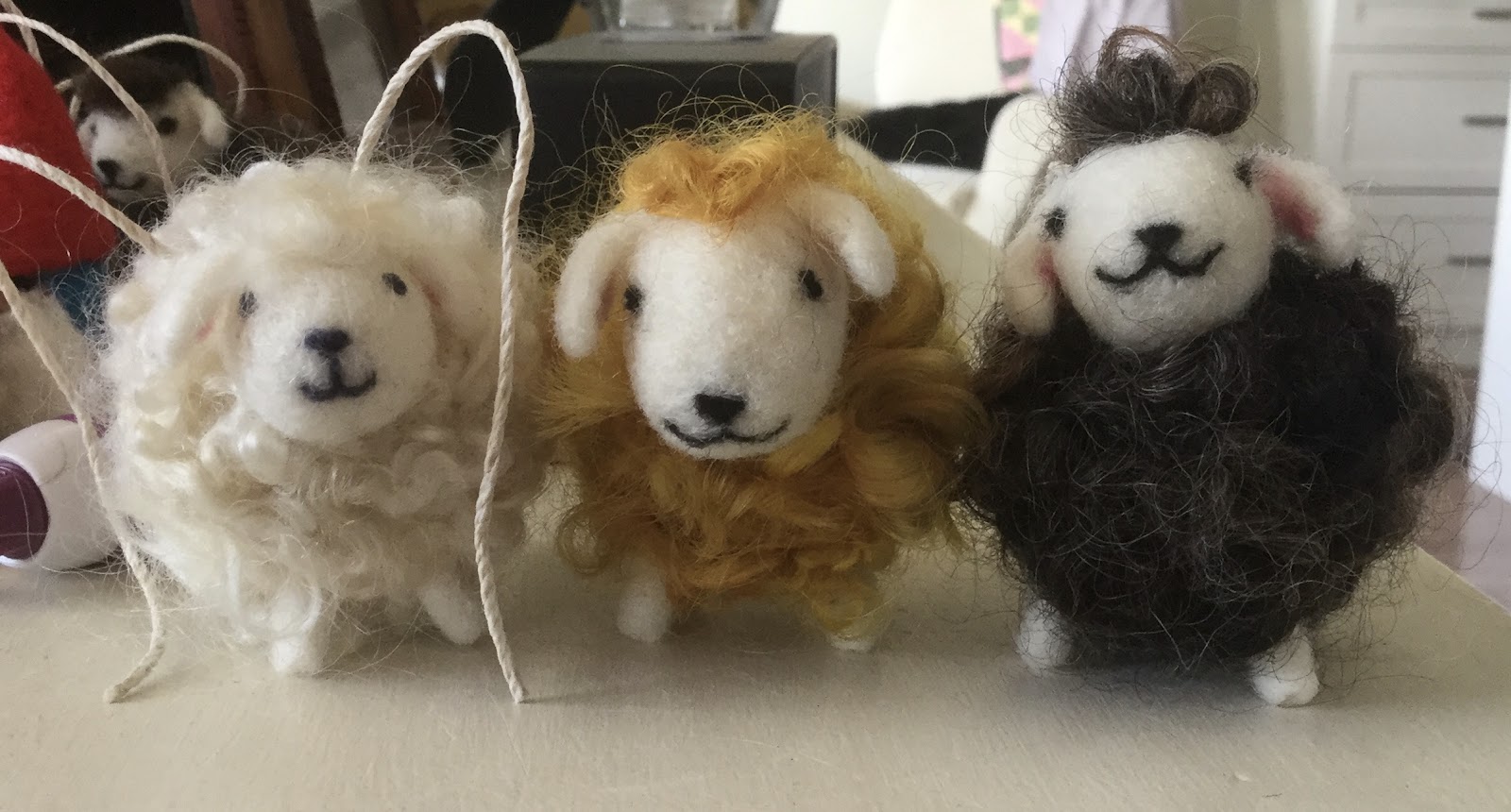 This year, I started making gnomes at the request of a loyal customer, but really, I’d been thinking about it for years. In 1977, when I was 16 years old, I bought a book about Gnomes, written by Wil Huygen. It had gorgeous illustrations. It was packed with fun, imaginative information. I loved it. And in 2013, when we were moving, I convinced myself that I no longer needed it and it was time to pass it on. I was wrong. I should have kept that damned book. Just think how authentic my gnomes would be if I still had that book. Well, maybe not, but it’s a nice thought. (I did keep my ‘House at Pooh Corner’ book though, so at least I didn’t completely lose my sense.)

My gnomes are smaller than the my sheep and have fewer individual parts to make, but I still spend a lot of time on them because their hats have to look just so, and if their eyes are too big, they look creepy, and if they’re too small, they disappear. By the way, there are some creepy eyes in that picture…I’ve since picked them out and replaced them. And I’ve fussed with those hats too.

And last but not least, each sheep and gnome gets a name, because, really, doesn’t every sheep and gnome deserve a name? I originally researched names from the British Isles for all of my sheep, but eventually I just started just adding names that I like or just make me smile. When it came to the gnomes, well, I had to decide what kind of gnomes they are. Are they Dungeons and Dragons gnomes? No, they’re not. Are they garden gnomes? Maybe? Are they forest or woodland gnomes? Probably. I’m still waiting for them to tell me. (Gnomes are notoriously shy and take awhile to warm up.) In the meantime, I’m giving them gnomish names that seem to fit. I hope they like them.

So that’s it. Every Christmas I make a dozen or so to sell, but really, it’s all about doing what makes me happy. The day I stop smiling at them is the day I stop making them. But for now, I love the finicky nature of making these wee gems.

And really, doing what feeds your soul, whether it be meditating or poking wool repeatedly is what it’s all about, isn’t it?